A Closer Look at the 2014 Innovation Award Winners

Posted on January 13, 2015 by Jessica Day | Comments Off on A Closer Look at the 2014 Innovation Award Winners 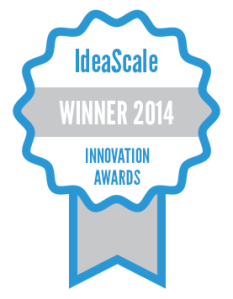 A few short weeks ago, while we were all still occupying the year 2014, we announced our 2014 Open Innovation Award winners. We pointed out two best practices that were used by all three of our award winners: social media engagement and ease of participation. Were you curious about how the winning organizations utilized these practices? We will quench that curiosity with a closer look.

Social media engagement was an important strategy for all of our winners. Whether it was an effort to increase the innovation community via social media outreach or whether investigating social media accessibility as a concept, all three found it imperative.

The latter was true for the Department of Labor’s ePolicyWorks initiative, which set up three dialogues to specifically investigate the accessibility of social media platforms for people with disabilities. This was especially useful in the final two of the three dialogues, as ePolicyWorks was seeking insight from participants outside the disability community about the state of social media and STEM employment for people with disabilities.

The Sunshot Catalyst Initiative at the Department of Energy utilized their Twitter account to garner approximately 11% of Sunshot Catalyst’s active members. The team also emphasized how social media outlets are valuable sources for crowdsourced participation in an innovation community.

Likewise, Scentsy—a company which uses consultants to sell products directly to users—wanted to check in about needs and desires of their customers. They used social media in order to promote successfully completed ideas including what would become the top selling warmer in company history, the Mason Jar warmer. This promotion of completed ideas in turn became an encouragement for the community to get involved and submit ideas in the future.

Another important aspect of their winning strategies was making participation as easy as possible for their respective communities. The Department of Energy’s Sunshot Catalyst accomplished this by giving users step-by-step screenshots of the process. By providing their community with easy instructions for participation, the Sunshot Catalyst team made participating more accessible.

The Scentsy team made participation easier by providing every opportunity and point of entry as possible for their involved consultants. Not only did they utilize social media channels, as previously mentioned, they also integrated links to their IdeaScale community throughout the Scentsy system, making it especially easier for consultants to get involved.

The Department of Labor’s ePolicyWorks created shareable communications—both for social media platforms and other spaces—in advance of the formal introduction of the dialogue online. Understandably, they realized that participation is easier when those you would like to be involved in the conversation are aware that it will be occurring, and even have an opportunity to consider in advance what their contribution to the conversation might be.

How might your organization make participation easier? How might you utilize social media to further engage your community?